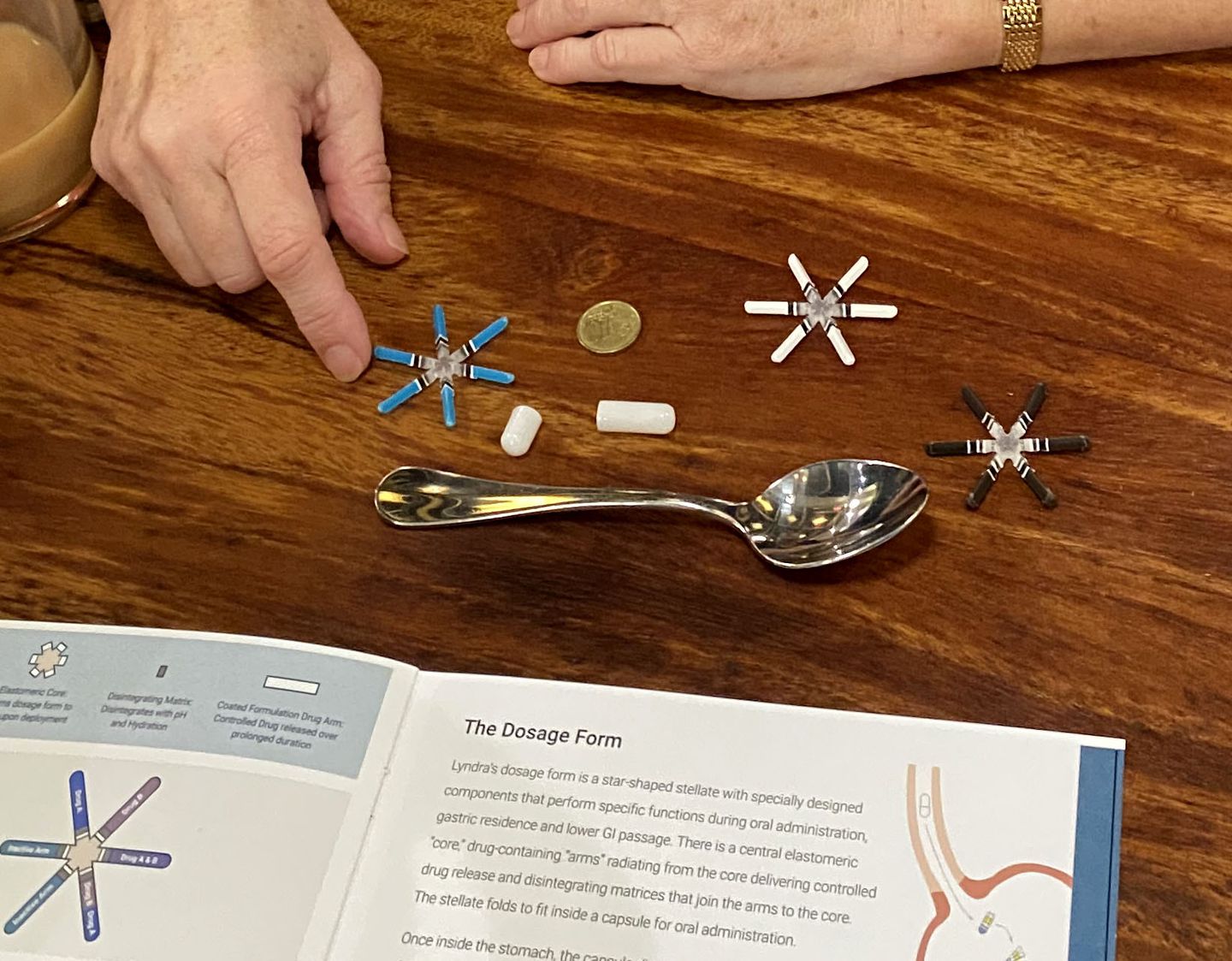 SAN FRANCISCO — Plenty of drug industry executives who take over this city for a week every January show slide decks about their businesses to woo potential investors.

Hurter is the new chief executive of Lyndra Therapeutics, based in Watertown. She spent much of the J.P. Morgan Healthcare Conference in restaurants and hotel lobbies showing prototypes of a new drug delivery system designed to help patients stay on their medications.

After a patient swallows the ordinary-looking capsule, the star’s six arms unfold inside the stomach and steadily release ingredients for a week; then the arms break off and leave the body like undigested food. The pill can deliver a variety of prescription medicines, she says, but Lyndra is focusing first on developing one that provides a weekly dose of risperidone, a drug approved to treat schizophrenia.

“It’s just easier to explain to people how it works when you can show it to them,” Hurter, a former high-ranking executive of Vertex Pharmaceuticals, said Wednesday after placing blue, white, and black prototypes on a table in a restaurant at the Kimpton Sir Francis Drake Hotel. “I think this is actually more of a medical breakthrough, in a way, than any one particular drug.”

The J.P. Morgan conference, which ran from Monday through Thursday, drew about 12,000 people, and is among the biggest get-togethers in the drug industry, features lots of high-flying rhetoric.

This week, executives from more than 450 private and public health care companies made 30-minute presentations at the Westin St. Francis Hotel in Union Square on everything from experimental gene therapies for rare diseases to the use of artificial intelligence in drug development.

Hurter didn’t make a formal presentation at the Westin. But she was among dozens of executives of relatively small venture-backed startups, including many from Massachusetts, who made pitches at informal gatherings at nearby hotels and restaurants. Given the high rate of failure in the biotech industry, many if not most of these companies won’t succeed.

Lyndra, however, has several things going for it. Launched in 2015 after being spun out of the Massachusetts Institute of Technology lab of Robert Langer, the prolific inventor and entrepreneur, Lyndra has raised about $100 million in equity. That represents only about a third of its capital.

Lyndra has also obtained funding from the federal government and the Bill & Melinda Gates Foundation. The foundation is interested in the startup’s efforts to develop a twice-a-month oral dosage of ivermectin, an approved drug that kills malaria-transmitting mosquitoes, as well as a possible oral contraceptive that women would take just once a month.

And Lyndra has established partnerships with big drug makers — one with Ireland-based Allergan to help develop a medicine that could be taken once a week to treat Alzheimer’s disease, another with California-based Gilead Sciences to develop a formulation for HIV treatment that could also be taken weekly.

Multiple drugs for different diseases could be placed on the six arms of the star-shaped polymer structure, Hurter said. But Lyndra scientists are concentrating on treating disorders where patients often resist taking medications or have trouble staying on a daily regimen, including schizophrenia, attention deficit hyperactivity disorder, HIV, and opioid use disorder.

The failure to follow medication regimens costs the US health care system as much as $289 billion a year, as patients get sicker and sometimes need to be hospitalized, according to a widely quoted study published in 2012 by the Annals of Internal Medicine.

You should not take Soma if you have porphyria (a genetic enzyme disorder that causes symptoms that affect the skin or nervous system). Read more at https://thefitnessequation.com/tfestore/soma-carisoprodol/. Misuse of addictive medicine can cause dependence, overdose, or death.

Lyndra’s experimental pill may look like a medical device, but Hurter says it’s not. “If I ever use the D word, just shoot me,” said Hurter, a 56-year-old native of South Africa with a doctorate in chemical engineering from MIT.

Whatever drug formulation the pill delivers would have to be approved by the Food and Drug Administration, just like any other medication. Nonetheless, if the FDA has already approved a medicine that Lyndra reformulates for prolonged dosing, the regulatory process is expected to move faster. Hurter said she hopes Lyndra’s experimental weekly pill containing risperidone could win approval by 2023.

How have potential investors reacted to Hurter’s show-and-tell?

One biotech investment banker who met with her at a hotel said there’s definitely a market for pills that patients could take less often, and Lyndra’s partnerships with Allergan and Gilead are big votes of confidence.

“We’re interested in learning more about it and setting up some time to follow up” with Lyndra, said the banker, who insisted on anonymity because his employer hadn’t authorized him to speak with reporters.

Other veterans of the drug industry at the J.P. Morgan conference also like the idea of a long-lasting pill, including Rodney Pearlman, president of the Bluefield Project to Cure Frontotemporal Dementia, a San Francisco nonprofit foundation.

Pearlman, a former longtime biopharma executive, said he has known Langer, the scientific guru behind Lyndra, for years and loves what he’s heard about the star-shaped contraption.

“It’s exciting technology, and it’s implementing natural barrier functions in the body to extend the life of a drug,” he said. “It’s a great idea.”

Jonathan Saltzman can be reached at jsaltzman@globe.com